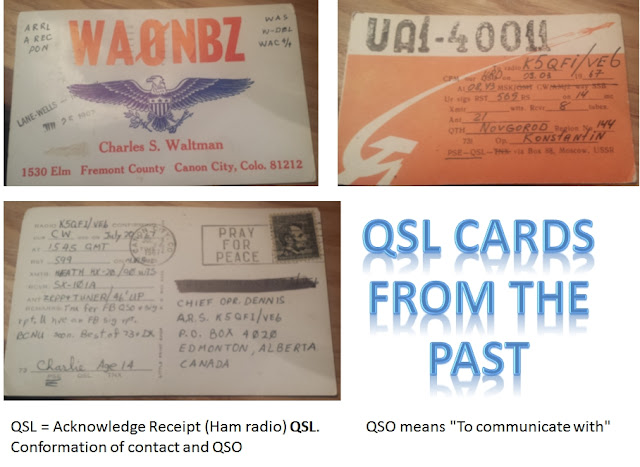 The above QSL cards are from 1967 when I spent some time in Canada in the Oil Patch. The one on the left is the front and back side from a 14 year old. The card on the right was from a Ham Radio Operator in Novgorod Russia. Both are from contacts made on the 20 meter Ham Band. Note the VE6 on the back side of my call sign. The VE means Canada and the 6 means my home was in the Provence of Alberta. Some times Hams send cards back and forth to confirm a contact made. It is a favorite hobby of some Hams to say collect a card from all 50 states and from all the continents.

What does Ham Radio and Radio Communications have to do with Surviving the Grand Solar Minimum? Actually many things. If the power is down you can forget using a cell phone, or watching TV or using the internet. Ham radio is probably the most robust and most reliable type of communications available. Ya, if you have a cool $800 cell phone and there is no internet or power its just an expensive piece of junk. If there is no power, then a string and two tomato soup cans would
work better.

Some of you probably remember the CB (Citizens Band) rage Good Buddy! These radio's used the 27 MHz band (10 meters). and had limited range unless you had a very large high gain antenna and an illegal amplifier. At times the CB band could be used to communicate over long range if the F layers were just right and the MUF (Maximum Usable Frequency) was above the 27 MHz frequency.

Ham radio and CB radio kind of took a back bench when the internet and cell phones became popular. Even a real dummy can operate a cell phone :)

I started my Ham Radio addiction many years ago. 68 years ago to be exact. At that time, my first Ham Radio licence was what was call the Novice ticket. My call letters had the letter "N" in it. 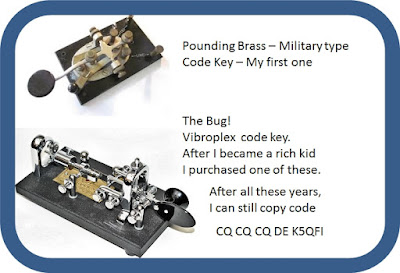 All I could use to communicate at the time was Morris Code or CW (Continuous Wave) transmissions. Essentially the transmitter was turned on and off using a Code Key.
The Novice license required that you pass a technical quiz and pass a code test of 5 words per minute (WPM) at the same time.  Later I took the General Class test and a 13 WPM code test and also the  Second Class Radio Telephone exam and a test for a Radar Endorsement. This license allowed me to work on commercial radios and weather radar transmitters and equipment. Not bad for a 9 year old kid and you had to actually understand the math and science behind all of it! The only problem was the voltages / currents used in this equipment could be lethal. The general class allowed me to communicate on more frequencies and using other communication methods like voice. Bouncing radio waves off the moon was in my future!

To listen to some Morris Code, go to this URL on YouTube here at this URL.

This may be a much too much for some of you, so you can always just not watch it.
Receivers and Transmitters


Well a radio and a receiver is pretty worthless unless it is connected to an antenna. Below is a video on antennas.

So what is so useful about being a ham Radio Operator or Ham? One thing will become certain, if you jump in to this head first, you will soon become a communications expert. You will get good at using and programming your radio equipment. You will learn how to communicate with other Hams. You could have a base station at home and a mobile system in your car. You could track other hams and they could track you using GPS. You could have the same digital equipment that is commercially manufactured and similar to the digital Motorola equipment. Using repeaters would become a day-to-day thing. You will make many wonderful friends who enjoy Ham Radio as well. You could become an antenna expert and communicate with Hams locally and globally. You could communicate through satellites built and put in orbit.

OK that is the nice thing. Now here are some security things about being a Ham Radio operator.

Being a Ham Radio Operator allows you to:

You can develop friends in distant cities using the internet connected repeaters. Have a cup of coffee while getting the latest new and weather from your friends. While driving to work in your car, chat with people all over the US, Europe, Asia and Australia.


Using the money you would have spent on a very expensive cell phone, you can purchase all types of Ham Radio equipment you can use at your home, car and while you are shopping and just walking around. You can be connected to the world with just a $20.00 HT (Handy Talkie)


Thanks and Cheers
Dennis