Things are getting interesting and perhaps more dangerous. Dangerous to humans and things like DNA and dangerous geophysically like increased cloud cover. As you can see from the recent balloon flights, the intensity of Galactic Cosmic Rays have increased even more. You can look at this graph at the following URL.  Note how high the recent flights and readings are.

The balloon flights are sponsored by Spaceweather.com and the students of Earth to Sky Calculus almost weekly since March 2015. So there has been a 22% increase from 2015 until the present (December 2109) Picture on the left is from one of the balloon flights

HEY! note the earth is not flat! 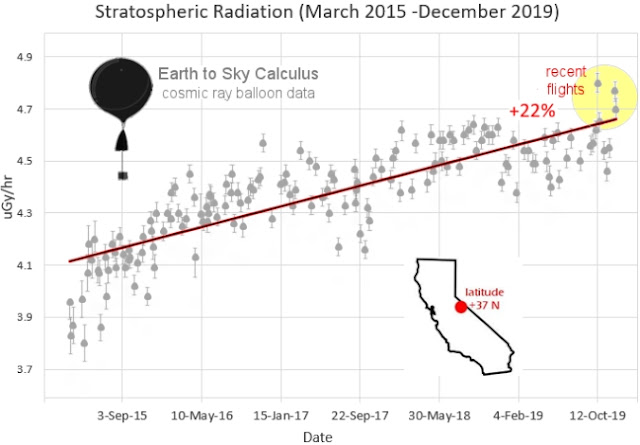 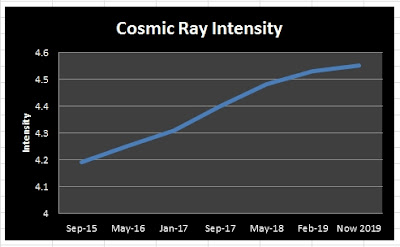 On the left is my probably not so well done graph of the increase in intensity over time and it doesn't look like it will get any weaker and you can't blame it on global warming or something crazy as a climate emergency caused by man.

There is certainly something going on to cause the increases. In the next days if we don't have any more sun spots, we will break records that go back many years. But sun spots are not the cause but are the smoking gun that is a dead give away. It's the SUN. The sun is gradually going into an inactive period. 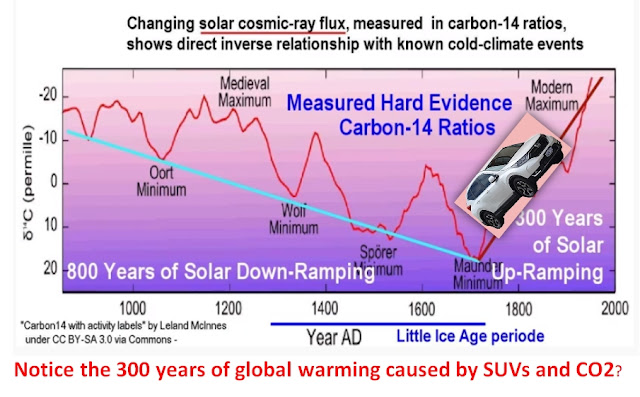 Yep they started building SUVs right after the Maunder Minimum (1700) and has caused all the warming to date! Actually Carbon 14 ratios point to the sun. We are coming to an end of that period and the earth will and is starting to cool. You can listen to Rolf Witzsche's new YouTube post at this URL The video talks about the above graphic and what caused global warming and the fact that it is ending.. As I have stated in other blogs, this 300 year period was a great blessing, at least for those who were not killing each other in wars. Just like the curve upward, we became better and better at killing as the population increased and we developed new technology some of it really bad. 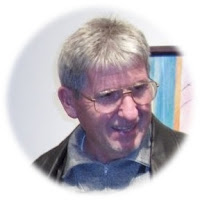 I am a follower of  Rolf Witzsche who has many and I mean many very good YouTube video's on climate and what He thinks is a coming icy cooling period that will cull a large part of the global population unless something is not done. I must agree, that is what it looks like, but:

It is for that above reason you will hear little on the subject. And mostly from a crazy old guy on this blog and wonderful and amazing people like Rolf.

Taking a look at the above graphic on the 23% increase in Cosmic Rays. For one thing most science proves that an increase will cause more cloud formation. Than in it's self will cause cooling. There are three more reasons that we are seeing an increase. These are:


Item 1 and 2
While all of the the above three would cause an increase in Galactic Cosmic Rays. Item 1 and 2 cause cooling and a weaker reflection or shield. One by a reduced SI and the other by a reduced magnetic field.

Item 3
Item 3 is really dangerous. As the earth's magnetic field weakens, we could easily have a global power grid down even from a relatively small sun hiccup!

One other problem is that this reduction and wandering has released our jet streams and the are doing all kinds of damage globally. Think this year and all our crop problems and those around the planet.

Modern humans if you can call them that have never experienced a earth's magnetic pole flip or extreme shift. By studying rock samples and fossils they point to deadly extinction periods.

In item 2
In Item 2 there is a hidden thing that is probably happening, This is the Ice Age TABOO thing. This taboo is not spoken about and only in whispers by a very few.  Please note that gravity sucks. Very true, but magnetic fields suck much more. Once you realize that our sun is a plasma and electrical sun, then you can fully understand the cycles in the Carbon 14 ratios in the graph. All the ups and down are caused by variations in the sun. These variations are caused by electrical, magnetic and plasma energy that feeds the sun. Its that simple and requires no atomic power plant in the center of the sun which is really a child's story. Remember that ice core data shows that the earth is an ice planet 85% of the time.

Perhaps we need to prepare? If you see any please let me know.

My new Radio Store is located at this URL

My new Radio Store is located at this URL