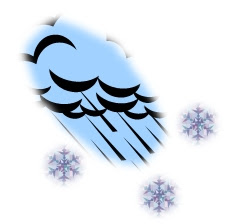 I can hear the wind outside. Its been a bit icy as the rain froze a bit and my stairs to the front of my house are slippery. It went from 73 today with a low of 29. I was in my greenhouse building a small greenhouse that I could heat. (greenhouse inside a greenhouse) I do it every year to keep all my greens alive. I finished just in time as the north wind hit our area here in Central Texas. I was amazed at the temperature contrast and how quickly it cooled.

Building small greenhouses inside of a larger one is a really good cold weather solution to growing food during the winter. Takes a minimal heater to keep above freezing. If you are running lights they add heat as well. Growing cold weather crops makes for more success.

The sun continues to be quiet as it looks like 2019 is more quiet that 2018 and will set a new higher record for fewer sunspots by the end of the year. 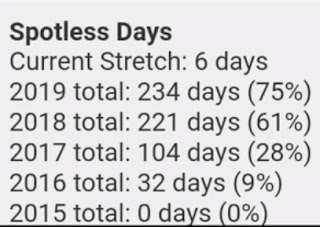 And the Galactic Cosmic Ray count is increasing 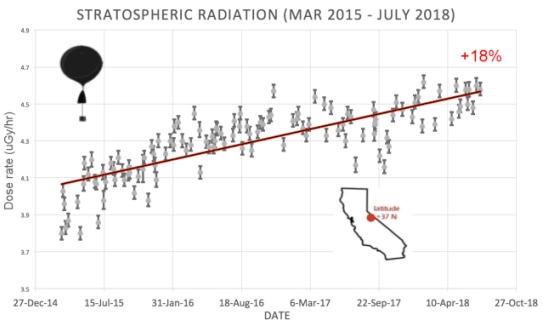 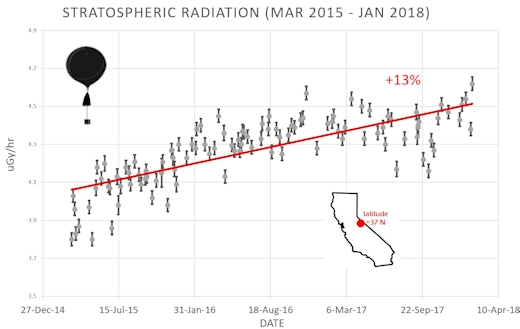 AND from Dr. Tony Phillips
Cosmic rays in the stratosphere are intensifying for the 4th year in a row. This finding comes from a campaign of almost weekly high-altitude balloon launches conducted by the students of Earth to Sky Calculus. Since March 2015, there has been a ~13% increase in X-rays and gamma-rays over central California, where the students have launched hundreds of balloons. 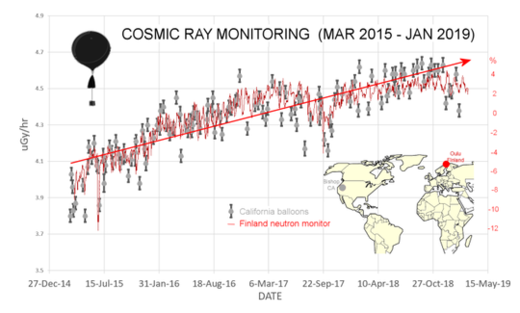 So more and more clouds.

Their tactics have changed from what was going around here last year. The are now spraying at very high altitudes.

I can't even see the aircraft like I could last year. Also the clouds don't dissipate and there now is a huge haze in areas of the sky where there are no clouds. This is a very high altitude haze as well. With all the clouds caused by cosmic rays and all the geoengineering some pretty nasty things could happen. 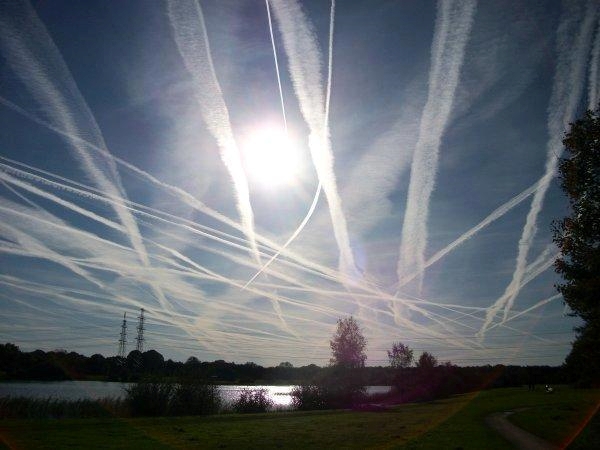 The above picture is some of the low level spraying. What I am seeing here is at a much higher altitude, say 25 to 35 thousand feet or more.

There must be huge amounts of money spent on the aircraft and chemicals. I wonder if those flying these aircraft know they are killing the planet and any future for them or their families if they have any? Anything for a dollar I guess.

And then there is Professor Valentina Zharkova and her data and presentation. So what is going on in Zharkova’s model? What she is predicting is that the magnetic fields of the sun will get out of sync starting where the A is displayed on the graphic below. This will start some time during sun spot cycle 24 and continue through cycle 26. During this period as shown by the arrows, there will be a reduction in solar activity as these waves go out of phase and cancel each other out. Note that sunspots don’t control the climate but are an indication of what the magnetic fields on the sun are doing. Note the faint red dotted lines are actually what happened on the sun. Note that the prediction is so accurate that it almost perfectly overlays the actual. This is what caused such a commotion at the presentation. These canceling waves will cause a very large reduction of SI (Solar Irradiance). Please note that as we progress, the earth should really start cooling and our climate become much cooler and violent. 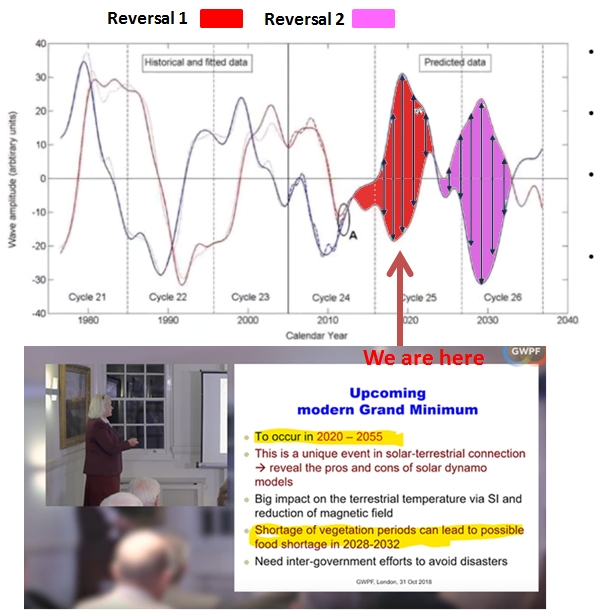 While Professor Valentina Zharkova's data and presentation lays out a 400 year cycle, there are many more thing happening at the moment that will cause all kinds of global climate problems. To list them:


Around 8 billion people will face the consequences of the above three bullet points. None of them are man made. Even more worrisome is the fact that there could also be more devastating man made activities like a financial collapse and war. Throw all the dice and it's only outcome is trouble for humans

The problem with the three bullet points is that we have little or no history to look at. The reduction of the Solar Wind is an indication of a coming Ice Age. The Professor Valentina Zharkova data indicates a 400 year cycle which could destroy crops and cause global starvation and migration. Finally, the pole flip is almost an unknown, except it could be just as world ending as the two other bullet points.

The earths magnetic fields (shields) are getting weaker and weaker at the moment making just a minor sun spasm capable of taking down our power grids. We could see ozone damage as well as DNA damage to all living things. 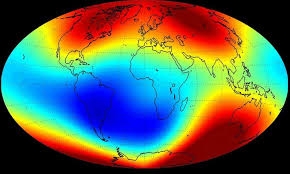 Things are bunching up and it looks like we will soon face a perfect storm of earth, solar and galactic devastation. Good reasons to prepare.

Now is the time to
Prepare (cheaper now than later)
Get 7 years of seeds (and some for others)
Start your own or a community garden (grow thousands of pounds of food)
Join, start or contemplate being part of a community (you could be a leader)
Take care of your family and neighbors (especially the older ones like me LOL)
Look after those that have less than you. (they are all over the place)