Here are some facts to think about. Many of these facts are derived from Ice Core Data which is about as good of data as you can get. Humans presently are living in the Pleistocene period. As shown in the graphic, we are living during one of those periods of a pulse of warm climate. For the most part, the earth has been an ice planet for 80 to 90 percent or more during this period. So technically we are living in an ice age called the Pleistocene. Generally when people talk about ice ages they are really talking about the cold periods of the Pleistocene. 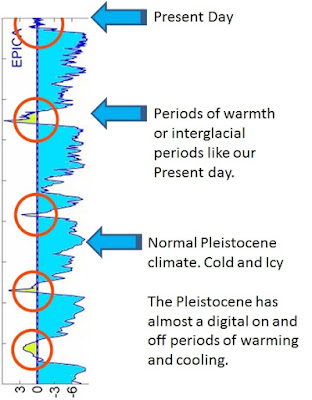 The big question is are we coming out of this present cycle of warmth and heading back into cooler time? From many things, it looks that way and will be covered in this blog. Remember I am just a traveled, free thinking old man, so don't expect any great solar physics breakthrough from this blog.

To answer this question is really important and could determine if we are prepared for what is coming or not. What could be coming is a cold that would cause the human population to teeter on extinction. I would think that most would agree that it is a good reason to look at the data we are collecting now, and very old and ancient data called ice core data. None of the ice core data is made up or messed with. It has no political agenda at all. It's just the bare facts laid out for us to look at and ignored at our own peril.

Most of us have heard about the little Ice Age and the problems it causes with crop failures, little food, migration and disease and generally a crappy place to live in Europe and the US. People survived through all that and eventually things warmed up and things got better. But what may be coming is a different animal (dog) as they say. What is really startling is what happened during the Little Ice Age compared to the Younger Dryas. See the graphic below. 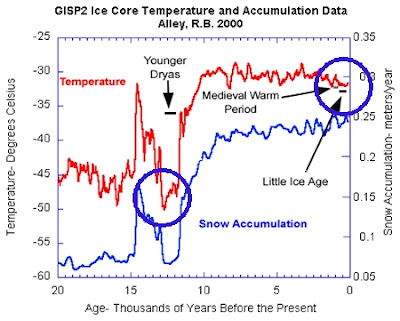 Now for something different

If we look at the graphic during the Younger Dryas, something totally different happened. Cooling during that period was 15 or more degrees Celsius cooler than the Little Ice Age. No one in Europe if they were living there would have survived.

While what happened during the Little Ice Age is nothing to sneeze at, humans may be looking at things much darker and colder that the Little Ice Age. If the coming colder earth is something like the Younger Dryas, then something would have to be done to actually survive the cold. If not they will not be many humans around to experience it. So what do we need to know. I would imagine we need to look at Ice Core data and place our self's where it ends and ask the question, what is next?

Answering the question of what conditions and observations would lead us to where we are going and what is next. This is a journey worth doing

The Journey and the implications

Obviously one thing that can have a large effect on cooling is cloud formation. I don't think this will cause any arguments. If you look at cloud data there has been an increase in cloudiness. With more clouds, we get a reduced density of water vapor in the atmosphere. This density increase can cause less water to be available for rain and can cause droughts and large increase of wildfires like we are seeing world wide and especially in California.

Earlier in climate research, it was  thought that variations in the earths orbit around the sun and its wobble caused Ice Ages. Later this data was not found to match what the climate actually had done.
Yes there is a climate effect there but never large enough to cause the cooling we saw during the Younger Dryas.

In one of my previous blogs I talked about NASA's Ulysses space craft SWOOPS mission that had detected between it's first and third orbit around the sun, a 20% drop in the solar wind and a huge increase in cosmic rays. 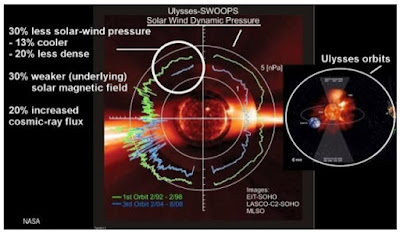 These cosmic rays are causing more clouds which reflect heat from the sun back into space. One other thing to worry about is that the solar wind is a measurement of the galactic plasma stream that is feeding our plasma sun. This reduction will also decrease the energy from the sun that warms the earth. At some point if the plasma stream becomes weak enough the sun will go into a low glow mode like some florescent tubes do when they get leaky and die. This will really kick us back into Younger Dryas conditions and hence why we should worry about our cooling future.

So looking at the above information, cosmic rays and increased clouds can cause climate craziness, but they do not have the forcing to start something like the Younger Dryas. Only one other thing can actually do that, and it's the sun.

Most people as I have talked with still think about the sun as some atomic power plant that pumps out heat in a consistent manner. While the suns visible light output does not vary much, all the other energy types generated by the sun can in fact vary up to 20% or more during some of the longer 11 year solar cycles and sunspots. This can also cause cooling and cause some really cold temperatures and climatic disruptions. So the sun is not some constant and people are not causing global warming / cooling or most anything that changes the climate. It's the sun.

So what is happening that we can observe?

First our sun is behaving in strange ways which can be traced to the fact that we are having a large number of days with no sunspots, and this drop has been going on for many years and many cycles.

Over the last 20 years the suns solar wind speed has dropped by 4% and it's temperature buy 13% and it's density by 20%, measured from the Ulysses space craft SWOOPS. This is nothing we should ignore.

The suns magnetic field are going in an out of phase further reducing the SI of the sun.

So if all this continues, (dimming), it is possible that we may dip back into the normal Pleistocene  type climate experienced for the past 85% of the last 2 million years. The transition would be caused by a slow but gradual drop in cosmic plasma current input to the sun, and if this gets low enough will cause a low glow mode in the sun and the start or a REAL Ice Age like in the Younger Dryas.

Our cold front just blew through and dropped 3 inches of rain in about an hour. There is ice and snow in the Texas Panhandle. The crappy Central Texas weather gods tried to stop me from getting any rain, but the popcorn type rain was too much for them to stop. Too bad suckers.

It's time folks as Christian at the Ice Age Farmer says. And I say: 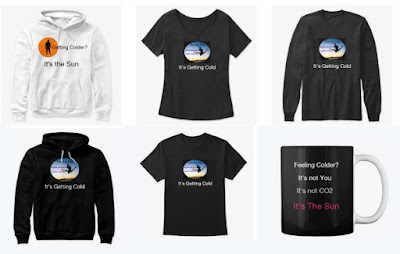 I have created my own Tee shirt line that reflects what I am doing on this blog.
To Take a closer look, take a look at this URL. I will eventually add more designs as I have two wonderful granddaughters who are very creative. Granddaughters are the blessings of being a grandfather!!!!