Whats Coming and What You Can Do


What is coming is pretty predictable. You can smell it in the air and you can see it in the media. It's always been there but more in your face at times. Russians and Europeans and many others have suffered from it by the multi-millions. Man has been plagued with it his whole existence on this earth.So what is the problem?

It's man's inability to get along and care for each other. It's greed for power and control by those than can and of course those who we let do that to us which is YOU and I.

Ya some times we get along but at best for very short intervals and there was probably an outbreak of security and plentiful food.at the time. When things got bad, the care went out the door and it was back to the old plague again. It seems that what most don't understand is that community is a very useful thing in coping with things when things get really bad. But as I have said before, humans seem to be a rather stupid species of animals. Below is a graphic that will solve most any thing or crisis. It encompass what we need for a peaceful existence on this earth if adopted. 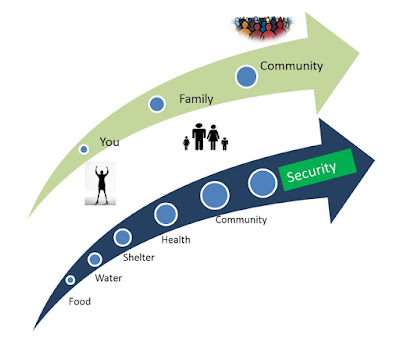 I am sure I will be reprimanded for not including religion, but that's for another blog by someone else. No place above will you see a need for atomic weapons, tanks, drones, armies, bombs, and oppressive governments or the UN or Democrats or Republicans or any other nonsense like that. The above is the only way that we will get by during the coming global cooling and SGSM.

The atomic weapons, tanks, drones, armies, bombs, and oppressive governments or the UN or Democrats or Republicans or any other nonsense like that will not save you from what is coming, and will only complicate and even destroy what is needed. You and I and all the people on this earth probably have only five (5) years to do anything. After that most of the almost eight (8) billion people on this earth may be lost.

In the next five years, the world needs to sort out what is coming and quit fighting and hating. Its time to develop technological solutions in protective growing of crops. Its time to develop housing and structures that don't care how cold it is outside. It's time and we have so little. I am going to show the following Ice Core data again:

Again I will say that the earth is an ice planet punctuated by very short periods of global warming which we are just leaving.

There is no CO2 emergency and people are not causing global warming.

What they are doing is polluting this world into oblivion with their / our "DICE and SLICE" selling of the earth. Your eating plastic now and drinking birth control pills and antibiotics. Take a look at that next time you drink a glass of water Sir!

So what happens if the next five (5) years are wasted? If they are ignored which I think they will be, then we will go from hopeless to helpless as we stare at the empty shelf's in our local grocery stores.

If the next five (5) years are wasted, you will need to have formed a community. We will need many thousands of them and there concerns should be the above first graphic I placed in this blog.

I have posted a free book on Community. I am not sure how many have downloaded it or even read it. There doesn't seem to be much interest in community. I guess people are so plugged into their own little boxes, that they can't fight or think their way out of it.

Speaking of boxes, here is one of the songs that has driven me all my life. You can find it at this URL. And then there is Pete at this URL

Don't live in a box people. It's time to change,

Wishing you the best from Central Texas