Its a Magnetic and Plasma World

OK Don't laugh at my description of my ideas of what an electrical world is like. Perhaps you need to go over to YouTube and find the thunderbolt project for a more detailed scientific explanation LOL. I have a simple background in electronics and electrical things. Things like magnetic fields and electrical current are things that I had always worked with and was fascinated with. When I discovered the electrical universe, I was finally at home. If you look at many of the pictures taken by Hubble and other telescopes and think magnetic fields, electrical current and plasma, every thing comes into focus. You can even see that dark matter they are spending gillions of dollars looking for. The answer is that there is no missing dark matter and what they are not finding is all that matter that is in a low or no glow mode. It's all there, and unless there is enough gas and birkeland currents to cause ionization, it will not be seen. OK that's my simple understanding of the electrical universe.

So lets look at our sun. A long time ago, the sun was no more than a huge collection of gas and other things I probably don't know about. The King and primary builder in the universe are birkeland currents and plasma. Plasma is the most conductive thing in the universe. While silver, copper and gold are great conductors of electrical current, Plasma is king. So where do birkeland currents come from? The answer is I have no idea, but they are there and there must be some huge source for this current as apparently it forms and runs the universe. That's a huge thing to wrap your head around is it not?

So lets look quickly at an actual picture of star formation below. The point where the star is created is called the pinch point. If there is enough current and gas and matter, a star will be built by currents and magnetic fields. If electrical current flows, there must be magnetic fields. At some point, the new star will be created in an intense explosion. Out of this explosion, planets and other junk can be created. The star then goes into a glow state. If there is not enough current and gas (matter) the the star will fail.

Below is a graphic showing such a pinch point. 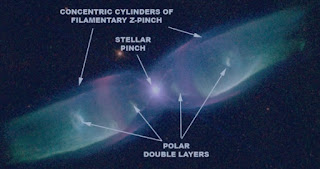 While I guess you could spend a life time thinking and studying this, I really want to focus on the climate and what is happening in our local universe or the Milky Way. It may be hard to think about it but we are on the outer edge of our Milky Way Galaxy and we are captured and move around in a spiral arm. 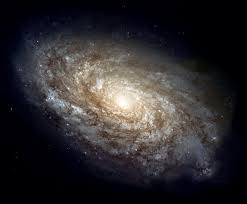 OK? Well it is a bit more complicated than that but we are indeed moving. While it is conjecture, and because the Milky Way Galaxy is electrical and plasma centered, our little sun and planets (Solar System) moves through different parts of the galaxy as it makes it way around.

Our sun and planets eventually run into more intense or weaker  birkeland currents. These currents apparently are why our sun can go into a low glow mode and start an Ice Age or a full glow mode and kick the earth into a warm period (global Warming).

As shown below, an intense stream of plaza and birkeland currents can cause the planet to warm (Global Warming). We are just coming out of this intense plasma stream which allow us to grow food in places never grown before and feed 8 billion people. You are alive my friend because of global warming caused by this intense Plasma Stream, so count your self lucky.

You have seen this graphic below if you read my last blog. The interglacial points on the graph is where our galaxy ran into more intense plasma streams. The earth warms for a while, then as our solar system keeps moving, it departs this high plasma stream and cools once again as a new ICE AGE starts.

SO Its really simple:

It's not you
It's not CO2
It's the sun (and those stinking plasma streams of course.)

Are we heading for a new ICE AGE that will last millions of years? It sure looks like it, but we will have to wait to see. One thing is a fact and that is that we are entering into a Grand Solar Minimum and what I call a Super one. Again, this fall and coming winter of 2020 will tell us a lot about what to expect.

OK, don't criticize my simple explanations above. I don't have a degree in solar physics, and is why I am sitting here all happy writing this blog.

Winter is coming
Start a garden.

It's 4:49 PM here in Central Texas
Best of everything
Dennis