Cosmic Rays and the BIG WHAMMY!

About
A group of high school science enthusiasts from Bishop, CA launching balloons into the stratosphere in hope of deepening knowledge of the upper atmosphere. Thanks! Guys

In winter 2011, Earth to Sky Calculus was just a name, a simple idea.  Today, Earth to Sky has meaning, history, perhaps even a touch of fame.

Below is a chart that ends in January 2108 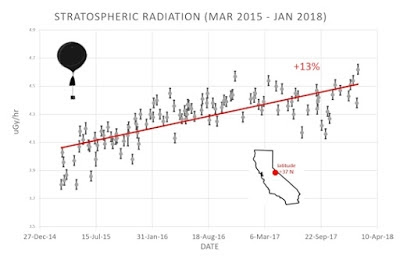 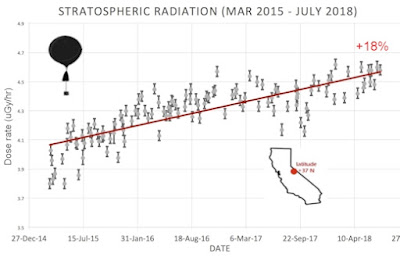 See the difference? So whats happening? Why the increase? My answer:


The earth's magnetic field is certainly doing strange things as we see below. We may see a magnetic pole flip in the next 10 or so years. As this happens, the earths magnetic fields are reduced and at the flip point they becomes very weak. At this point we become even more exposed to the sun and galactic radiation. All this causes more clouds and a cooler earth. 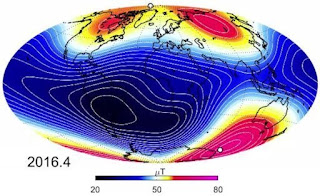 The sun's four magnetic fields are going out of phase and cancelling each other out. We can see the results of this in reduced sun output and very low sun spot counts. This is just another cycle of the sun.

In addition to the above, Birkeland currents which drive our plasma sun are becoming weaker. The Solar Irradiance (SI) is then reduced and we cool even more. Its a double, triple or worse Whammy

We are definitely ready for a coming ice age which can easily be seen in ice core data. Our orbit around the sun is going to be at a point where we will receive less heat from the sun. As we travel around our galaxy, we are going through an area that has weaker Birkeland currents. AND the earth's magnetic fields are getting weaker and may flip. Any of the above things could have really bad consequences, but when you are combing all of them at the same time. Well a big WHAMMY!.

So what are the above two charts have to do with anything. Well everything I have mentioned above would cause the increase in the charts which you can see happening.

If you are new to this blog, everything discussed above has been covered individually in my older blogs. Take a look at them.

It's really a good time to prepare. As you may have seen at the UN lately, our young people are really dumber than rocks. (well not all of them), The have really sucked up the human caused warming propaganda.

And More from the Moon and a great URL 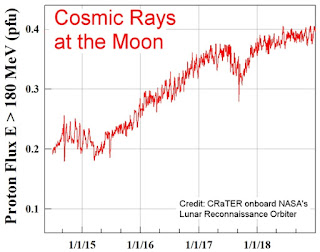 It's a bit cooler here in Central Texas. Here is wishing that you _________ (fill in some good things!).
Cheers
Dennis