As the US and the world seems to have lost it's moral compass, and is tearing it's self apart with insanity and social media nonsense, there is something creeping this way. It's not talked about much, and that is the cooling sun. If we look at ice core data, you will soon realize that the earth is an ice planet with a few short periods that don't last very long of global warming. 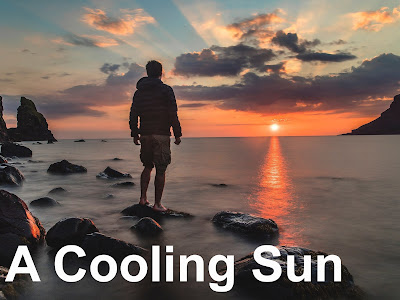 As we play our little deadly games of greed, hate and political madness, something more final and more deadly is on it's way..

I have written over and over and gave evidence of this but not a peep or burp of any thinking in this direction by anyone.

In fact the opposite is happening and the global warming agenda that is being pushed is the cause of much of the insanity. As I travel about, I have observed that people seem to be more on edge. Its almost a zombie atmosphere out there

As a believer in the electrical and plasma universe, what our earth has gone through in an almost digital fashion becomes very easy to understand. Sorrowfully, there are scientists out there who are still searching for dark matter as the gravitational universe model is still part of their religion. This won't really matter much longer.

As the sun cools, it may revert back to its normal state. That state which has been around 85 percent of the earth's climate history is a cool and low glow state. If that happens our climate will revert back into an ice age and continue that way for millions of years. Its all in the Ice core data. Its a cycle as shown below.

The interglacial warm period which you and I now live in has made it possible to have a population of almost 8 billion people. This warm period which is shown in the graphic is a digital certainty, but this climate anomaly is coming to an end.

Mankind will soon and very soon have to face this.


The now defunct Ulysses space craft first measured this collapse in the solar wind. Looking at the graphic, we only have about eleven (11) more years until the sun starts its diminishing (low glow mode) phase. After that a new ice age will resume. So the clock is ticking and as we humans keep tearing our self's apart with insanity and social media nonsense we are ignoring the elephant in the room. 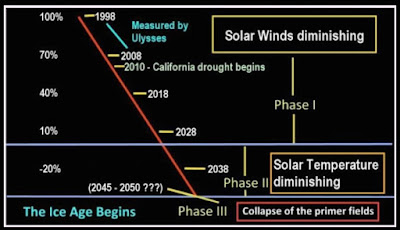 We can see many of the consequences caused by a reduced solar wind, especially in increased cosmic rays and in an increase in clouds.

So what would happen if the sun went into a low glow? This 70% drop in SI would mean that only parts of the earth's tropical regions would support life.

So what can we do as a society if this is coming our way? You can see the lights coming down the track. I fear that if we continue on our ways of self destruction, greed, hate and moral destruction of society that we will almost all be gone before we see what a low glow sun even looks like.

It looks like man is actually a very stupid creature.

Perhaps I am just old school, but what is important to me seems to be lost on our present generation. What is that you may ask? Well its love, family, caring and taking care of the only earth we will ever have. What is important to me is my wife, kids and grandchildren and my neighbors. Health, happiness and peace are some place in there too. Security, and a roof over my head and enough food to get by could be tossed in there as well.

All the above things come at a cost. They are not a given, and must be earned. They can be taken out of your reach if you don't protect them which is happening at this very moment.

So the question is this in bullet points:


I guess it all depends how quickly things play out. None of this must be this way. Again its a choice. If we were not so embedded in our back sides, we could prepare for the cooling and make a place for those 8 billion people who depend on a little food to survive each day.

The weaker Sun is coming. How do you think it will play out? I am not taking any bets.

Wishing all of you the best.
Start a garden and hug some one in the morning.

.I have updated and enlarged the Surviving the Super Grand Solar Minimum book. I also have the SGSM book and three others at this URL. They all come in a PDF format.