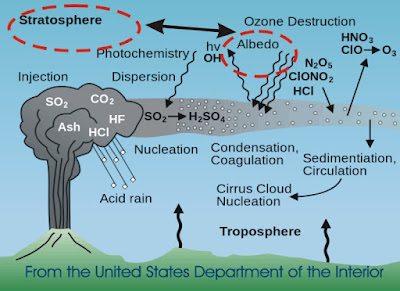 There have been many volcanic eruptions lately that have sent large amounts of particulates that block out the sun. In order to do real long term blocking requires that the ash and gasses are injected into the earths Stratosphere. At these highs, the ash and gas get injected into the earths jet streams where they are carried all over the earth. The worst injections that cause the most cooling (Albedo Effect) are from volcanoes at the equator. I am not saying that other volcanoes at other places do not cause cooling. Lately we have seen multiple volcanoes doing just that. While none of these have been huge, the ash and gases that they produce are cumulative. Some of the particulates and gases can stay up in the Stratosphere for up to two years and circle the earth causing planet wide cooling. Some single volcanoes in the past have caused crop failures and a year with out a summer. When this happened, no crops were able to be grown. The problem with volcanoes is that a collection of small ones can do the same damage as a really large one. This is what we are seeing now, and will probably increase in the future as the Super Grand Solar Minimum plays out.

So why am I bringing up Volcano eruptions? The reason is that it is very common for very intense volcanic eruptions to occur during a SGSM.

From Wikipedia, the free encyclopedia

The Year without a summer

The year 1816 is known as the Year Without a Summer (also the Poverty Year and Eighteen Hundred and Froze To Death) because of severe climate abnormalities that caused average global temperatures to decrease by 0.4–0.7 °C (0.7–1.3 °F). This resulted in major food shortages across the Northern Hemisphere. 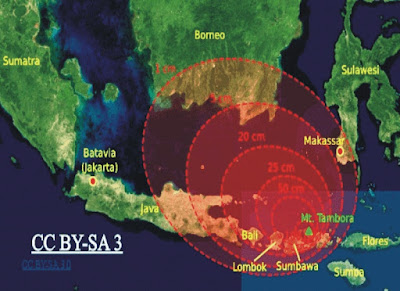 Evidence suggests that the anomaly was predominantly a volcanic winter event caused by the massive 1815 eruption of Mount Tambora in the Dutch East Indies (now Indonesia). This eruption was the largest eruption in at least 1,300 years (after the extreme weather events of 535–536), and perhaps exacerbated by the 1814 eruption of Mayon in the Philippines.

The graphic records the ash deposited from the Tambora eruption.


This eruption filled the atmosphere with a stratospheric sulfate aerosol veil. This blocked out the sun and caused acid rain. The Year Without a Summer was an agricultural disaster. Historian John D. Post has called this "the last great subsistence crisis in the Western world". The climatic aberrations of 1816 had the greatest effect on most of New England, Atlantic Canada, and parts of western Europe. Looking at ice core data we can get an idea when this happened and other occurrences. The peak after 1815 was caused by Mount Tambora. 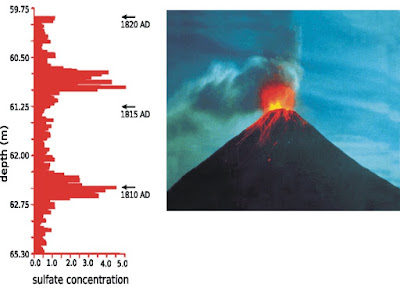 Description (hard to wrap your thoughts around).

Volume of products, eruption cloud height, and qualitative observations (using terms ranging from "gentle" to "mega-colossal") are used to determine the explosivity value. The scale is open-ended with the largest volcanic eruptions in history (supereruptions) given magnitude 8. A value of 0 is given for non-explosive eruptions, defined as less than 10,000 m3 (350,000 cu ft) of tephra ejected; and 8 representing a mega-colossal explosive eruption that can eject 1.0?—1012 m3 (240 cubic miles) of tephra and have a cloud column height of over 20 km (12 mi). The scale is logarithmic, with each interval on the scale representing a tenfold increase in observed ejecta criteria, with the exception of between VEI 0, VEI 1 and VEI 2. See Public Domain graphic below: 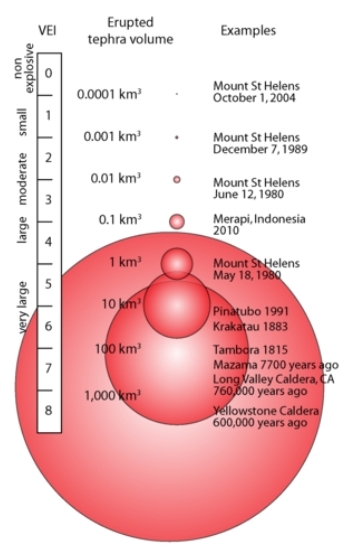 Note: If you hear of a VEI 6 or greater eruption, take all your money you have and purchase food. A VEI 5 to 8 would wipe out food production for years over most of the earth!

So why is there a correlation between large numbers of volcanic eruptions and the SGSM? The reason is because of an increase in cosmic rays caused by a large gamete of reasons. One of which is the reduced output of the sun and the earths reduced magnetosphere. This allows an increase in cosmic rays which interact with volcanoes with silica-rich and highly viscous magma. It is this very type of volcano that produces violent explosive eruptions that result in disasters in local communities and that strongly affect the global environment.

Thanks for reading my blog. If you want more on this subject, you can listen an view the video just published by David at Adapt 2030 on YouTube at the following URL. Tell David I sent you.

Cheers and the best of everything. Start growing food. Get a greenhouse and purchase some seed. I will be creating a blog about seeds and how to build a greenhouse later when I get time which is getting short.