I have been communicating using radio for the past 67 years. I started as a Ham Radio Operator that many years ago as a young boy. Using  radio communications equipment is a very good way to communicate over a distance, Depending on the frequencies used it is possible to communicate just down the street or globally. If you have a radio, then you can be miles ahead of the competition. A radio allows you to keep in touch with as many other people that have a similar radio. This is call communications at a distance. Ya I know that you don't really want to learn about radio communications, but knowledge is always valuable. Beside, in the case of a grid down, there will not be any way to communicate except through radio.

Duplex
A cell system is a duplex system where you can talk and hear at the same time. If the cell tower is not working, then your cell phone is a worthless piece of junk. Also the internet must be working as it keeps track of what tower you are using and will switch you from tower to tower as you move about. I don't expect the internet or cell towers to be working during the deep days of the SGSM.

Simplex Repeater
A repeater is a powerful radio transmitter and receiver. They are usually put on towers or high buildings ( The antenna any way). Repeaters allow some one with a low power radio to talk over long distances. Here is how it works:

A repeater user can only do 1 thing at a time - Transmit (Uses the repeater) or receives (Listens to the repeater. If the repeater is down, then the system will not work. This type of system is used by most city and state agencies - Also Ham Radio Operators.

How far can you talk?
The distance is determined by a bunch of different things. For most communications you will be doing (VHF and UHF) radios and will be line of sight. You can transmit further than line of sight by increasing the power of the transmitter on both ends, or clime a tree or go to the top of a tall building which increases the line of sight. Most portable radios are the Handy Talkie (HT) type that are low power and have very small antennas. In a radio system there can be a Base station. Usually a base station has a more powerful transmitter and it's receiver is connected to a higher gain antenna that may be higher in the air. This allows the base station to talk with lower power HTs..

Polarization
Most communications that use VHF or UHF frequencies are vertical polarized, The example below is a vertical system. Note: VHF = around 150 MHz and UHF = around 450 MHz.

If you are purchasing some of the cheap walkie talkies (HT) be careful. The range stated on the advertising is mostly crap. You will be lucky to get  a few blocks using these radios. Later in this blog, I will talk about how to set up a community system.

OK, so you don't really like all those cheap HT's. Range sucks and and you need to communicate over longer distances. There are only two ways to do that. One is the Family Radio Service (FRS) and General Mobile Radio Service (GMRS). And the best of all is Ham Radio or Amateur Radio operation.  All the above are controlled and licensed by the Federal Communications Commission (FCC). Most all countries also have the equivalent to the FCC.

Below are examples of FRS and GMRS radios. 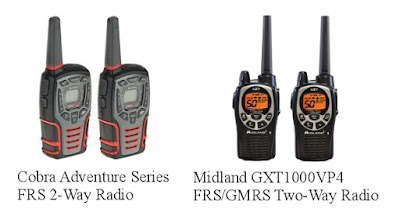 Now even Stupid dummies can get a Ham Radio License if they have a good memory. The dumbing down of America. - Dennis

OK I got that off my chest. so here goes. If you need to communicate better than the above family radio equipment, then you will need a ham radio license. Note, most Hams frown on any child like play on the ham bands. You will be quickly told about anything that seems silly or child like. Also the FCC monitors the comings and goings on the ham bands. All ham band frequencies are first come first serve. It is unlawful to purposely interfere with communications on the ham bands. Your transmitter must also meet the FCC's requirements for proper operation. The Ham Bands are not broadcast bands (like AM and FM radio). The purpose of the license is to communicate with other hams. You cannot transmit music on the bands. The Ham Bands are at times used for emergency communications. This type of communications overrides the first come first serve operations. So if you are looking for a place to play, this is not it. You could also be fined or jailed for improper use of your license or possible loose it..

There are three types of licenses for ham radio operators being granted today:

After you pass a specific test level which is called an element, you have permanent credit for it as long as you keep your license renewed. Elements allow you to progress at your own pace. A ham radio license is good for ten years and you can renew it without taking an exam.

The Technician class is the easiest to get or to start with.

Nearly every ham starts with a Technician class license, also known as a Tech license. A Technician licensee is allowed access to all ham bands with frequencies of 50 MHz or higher. These privileges include operation at the maximum legal power limit and using all types of communications including repeaters. Technicians may also transmit using voice on part of the 10 meter band and Morse code on some of the HF bands below 30 MHz. The test for this license consists of 35 multiple choice questions on regulations and technical radio topics. You have to get 26 or more correct to pass.

Morse code is no longer required, but it still makes up a great deal of amateur operations. The author learned code when he was 16 and I can still copy code and I am 75 at this writing.  If your interested you can get a book on taking the exam, and how to actually operate your radio. Also the lingo and codes used in ham radio. There are also free internet sites that will help you pass the exam  (practice sites). Exams are usually given by Ham Radio clubs. Search the internet for Ham Radio Clubs in your city or just talk with a Ham Radio operator if you know one.

They should be really happy to help you.

SGSM communications
As I wrote about it in the Family and Community section, radio communications will become important for security. You can make this a local thing by purchasing some of the FRS radios for your family and those community members around you. Because there may not be any commercial power available during the SGSM, you will need to have a way to keep the batteries charged. A solar DC battery system running an inverter would be perfect as all the chargers use AC power.

Here are some things that are not legal at the moment and I am not suggesting that you do it. One of the problems is that most of the HT's have a small antenna which limit distance. Although illegal, some people are purchasing the cheap Chinese HT's that can be programmed on the FRS frequencies or come programmed from the factory. These have an antenna that is removable. They are then connecting high gain antennas to the HTs to increase range. My thinking on this is that I normally would never do this, BUT if the SGSM goes crazy and the SHTF, all bets are off.

CHIRP runs on Windows 2000, XP, Vista, 7, 8, and 10 and the Mac OS X version. It also runs on Linux, and there is a Linux-based LiveCD that has CHIRP pre-installed. This will boot on almost any system and provide a highly-compatible CHIRP environment without the need for fussing with a driver. It will not modify your system in any way. 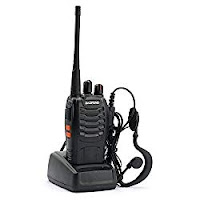 See at this URL.

You can get them for about $15.00 each. If you purchase in bulk (Amazon) you can get the cost down to around $10.00 which is amazing. The BF-888 has 16 programmable channels. I program them for ham radio repeaters in my area. I have them all over the farm, Home, office, green house and two cars and van. I get really good performance from them and good audio reports all the time. I have even use one as a base station. The HTs have a removable antenna and I connect it to my high gain vertical base antenna. I also have a microphone for the HT. 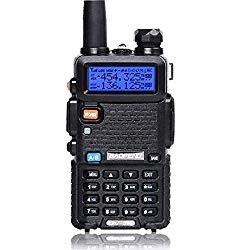 Another radio I use for my car when I take trips or vacations is the BaoFeng UV-5R Dual Band radio,

See it at this URL

The 5R has 128 programmable channels and costs around $25 or more depending on what radio you purchase. As I pass through towns that have repeaters, I just select the channel I programmed before I took the trip. As I travel a lot, I have many files that I have saved on my PC that I can load on the HT. I also use a microphone on the HT. You can also get battery cigarette adapters if you wish.

If you get your Ham License, it will not cost much to get started. 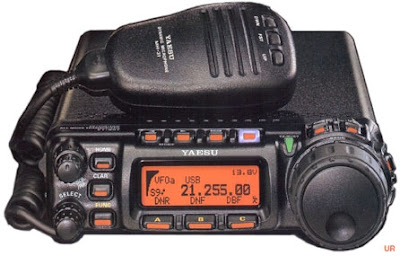 The above transceiver, while is expensive, it does just about everything and is the reason I purchased it. It covers all the low bands as well as VHF and UHF frequencies. It's a all mode radio and can do side band (LSB/USB), code and FM, repeaters and others. This radio runs off 12 volts DC.. I have a power supply to run the radio, but could be run off a battery if needed.

Radio in the SGSM
So why would you use a radio during the SGSM? Obviously if you have a community or family, you will need local communications. If I was going to do this, I would have a VHF or UHF base station that runs on solar power, and small cheap HT's for everyone else. If you put the base station antenna up high enough, you could communicate overs miles with just simple equipment. Because the HT's need to be recharged, you will need AC power to run the chargers that come with the radios. One other thing. If there is a grid down caused by the sun or from an enemy, you will need some sort of Faraday Shield to protect the equipment.

Below is my Base Station Radio. It can also be used in my van. Here is the advertising on this radio. The Yaesu FT-8900R quad bander gives you incredible power and flexibility on the road. Operate 10 meters, 6 meters, 2 meters and 70 centimeters. High power output is featured with 50 watts on 10, 6 and 2 meters and 35 watts on 430 MHz. It is like having two radios in one with dedicated Volume and Squelch controls on each side. Built in features include: duplexer and CTCSS/DCS Encode/Decode. Over 800 memories are available. It is WiRES compatible. 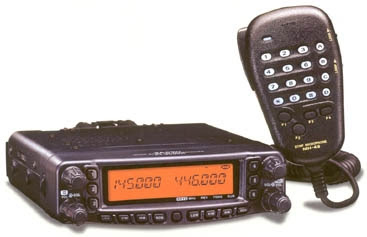