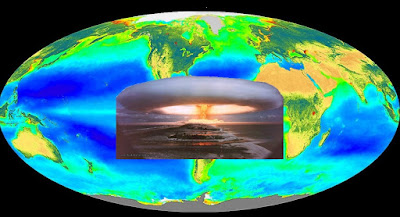 Mankind has been causing global suicide from the very start of his existence. That does not say much for us does it? It's really kind of crazy if you look at it. I am not sure, but it really looks like most people are rather poor thinkers. Some are really good though, as the human has some amazing capabilities and possibilities if we only use our brains and get out of the box called settled science. Its even worse than that. Science, math, creative thinking and personal values and possibilities are on a huge down hill slope. Possibilities are not an option in the day to day activity of most people.  It seems once something amazing or new thing is created, there is a herd of people that seem to want to burn the person at the stake. We have seen this over and over through history. It is really apparent in our scientific communities for the past 100 years or more. Science seem to have stopped thinking anymore as it all became settled. I am amazed that someone can actually say the science is settled.

The problem with all this non thinking is that we are all trapped in our present reality. Any other reality is not part of our day to day thoughts. I am total amazed at what humans do to each other. Are You amazed? Why so much violence? Why so much stupidity? I have come to the conclusion that society in general will not be here in the next 40 or 50 years. If we don't kill each other, then nature will do it for us.

Which is the the reason for this blog. Besides all the crazy human infested problems. there are two other nature caused problems coming down the human freeway, These two are the following:


So if we don't get really stupid and kill each other with guns, bombs, disease, laws, religion, greed, power or just plain evil, then the other above items will do it for us. We don't have to do any of this. Stupidity is a choice. Also letting the above bullet points kill us is a choice as well.

So how can a person turn the lights out? There are three ways. 1) Flip the breaker in your home. 2) Burn down your house. 3) Do nothing and just don't pay your light bill.

Personally item three can be applied to the above bullet points. Just do nothing. Ignoring the two will really puts the world's lights out.  There are so many really good things about people, our children and society in general that are worth saving. But it's really a choice and we don't seem to have much time left. If we choose to fight what is coming in the two above bullet points, we might just get around the guns and bombs thing.

If we ignore the above two bullet points, I can almost say for certain that the guns, bombs, disease, laws, religion, greed, power or just plain evil will happen and cause even more Global Suicide.

These are my two of my recommended seed suppliers at this URL
Posted by Dennis at 10:43 PM