Solar Wind Observations Over the Poles of the Sun (SWOOPS)


One of the measurements that we will be looking at are the solar wind measurements. What is so interesting about the measurements are that as the space craft made it's trip around the sun, the solar wind diminished as seen below in the graphic. This was unexpected and points to a sun that is starting to cool down. As the sun starts its cool down, cosmic rays have started to increase, causing more clouds.

So what is the Solar Wind. The following is from GLOBAL WARMING Wikipedia.

The solar wind is a stream of charged particles released from the upper atmosphere of the Sun, called the corona. This plasma consists of mostly electrons, protons and alpha particles with kinetic energy between 0.5 and 10 keV. Embedded within the solar-wind plasma is the interplanetary magnetic field. 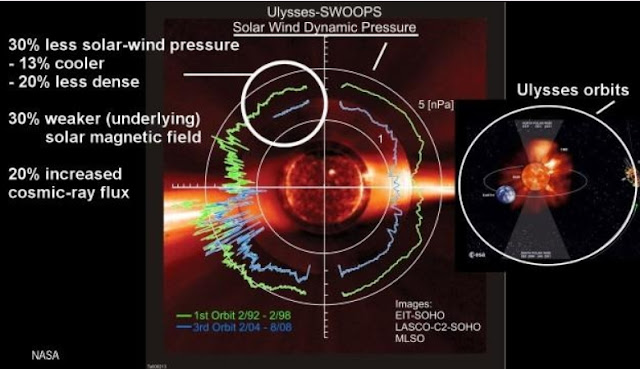 If the corona is cooling down, then the energy hitting the earth is also getting smaller. So what is causing this reduction of the solar wind? If you are a proponent of the electrical universe, then you would explain this reduction by a decrease in current that flows through the electrical circuit that powers the sun. Because the sun is a large ball of plasma, any reduction in current that powers the sun would directly cause the corona to have a reduced energy output.

So what is happening here? Are there two things happening? It sure looks like it.

THING ONE:  A reduction of sunspots caused by the magnetic interaction of the four magnetic circuits of the sun as described by Professor Valentina Zharkova.

THING TWO: A reduction of galactic current powering the sun as shown by the Ulysses SWOOPS program. Or a reduction in the Solar Wind. 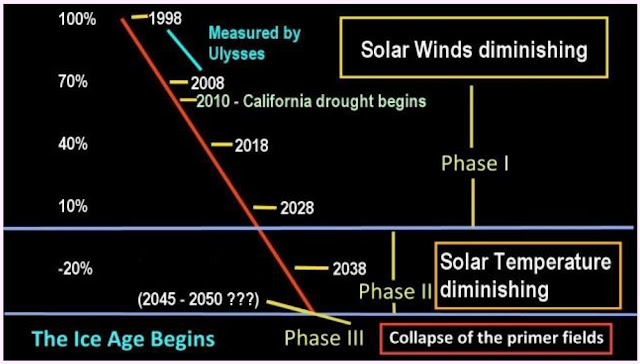 \While the Ulysses space craft is no longer functional, We are still seeing a huge increase in Cosmic Rays. This probably points out that the diminishing of the Solar Wind is continuing. If the solar wind continues, at some point the sun will enter it's low glow mode.

So this is a crazy blog for sure. I am not sure what exactly will happen. Perhaps the THING ONE and THING TWO will combine into a huge reduction in the energy level (SI) coming from the sun and we will quickly cool into the Super Grand Solar Minimum and eventually an ice age?

One thing is for sure, and that we are living in interesting times. Well its time to get back to bed. It's 4:17 AM here in Central Texas. I guess I am a crazy old man that can't sleep. The problem is that the SGSM is roaming around in my head and I can't get it out.

These are my two of my recommended seed suppliers at this URL
Posted by Dennis at 4:28 AM