Ya that is what I said. Its a Bombogenesis. Yep even my spelling checker never ever heard of that so I guess I owe you a description.

From NOAA - Those know it all's

Bombogenesis: A popular term used by meteorologists, occurs when a midlatitude cyclone rapidly intensifies, dropping at least 24 millibars over 24 hours. A millibar measures atmospheric pressure. This can happen when a cold air mass collides with a warm air mass, such as air over warm ocean waters. The formation of this rapidly strengthening weather system is a process called bombogenesis, which creates what is known as a bomb cyclone.

Hmmm OK that's cool, but this can also happen over land, or can happen over water and move onto land, especially during the SGSM. The most interesting thing about all the bad spat of weather that has almost wrecked our Central United States growing areas were all caused by not one but two of these beasts. The graphic below from NOAA shows what it looked like from a satellite's view point. Pretty Big- No? 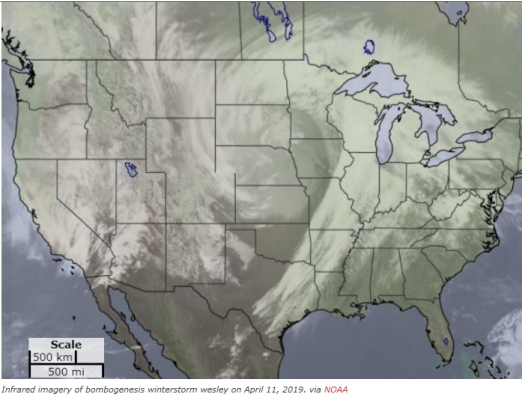 So what can we conclude about the above graphic. Well its one large low pressure for sure. And it is colliding with something out west over Montana all the way down to North Texas. Along this line, atmospheric compression  is taking place. So what is Atmospheric Compression? There are probably good descriptions out there, but if we are talking about jet streams, it can happen when very cold arctic air meets hot, humid air from the tropics. We are seeing a lot of this lately as our jet streams have left their normal patters and are dipping up and down into places they have never been. Some crazy things can happen when this occurs. Along the compression zone, you could have very hot humid weather and almost biblical rains. Just 50 or less miles away there could be an area that is receiving hail, ice or snow and in copious amounts and huge drops in temperature. Huge lightning displays occur at the boundary points. Only rarely do things happen at this amplitude and with such fury. (we see a little of this when we get a "Blue Norther" as we say here in Texas) But we do not live in normal times because we are just getting started with our decent into the Super Grand Solar Minimum. A Bombogenesis and atmospheric compression is just part of this decent. As the years pass, this will become more common and more violent.

Interesting enough I observed all of this happening from my view point here in Central Texas. As the tail of the low pressure swept through here, the winds picked up and huge amounts of humidity were hurled north by the low pressure. It was crazy windy here for awhile as all the heat energy was sucked north.

But two is always better than one right? Well when the US was getting hit by a Bombogenesis which would make the Central US look like a lake later in the spring, another one formed out in the Atlantic and was heading for Greenland. Now Greenland is a large place for sure, so the one in the graphic is huge to use a large word.This is an amazing example of jet streams going off track causing unpredictable weather events. As I said before in the above paragraph, look for even more this year and next. 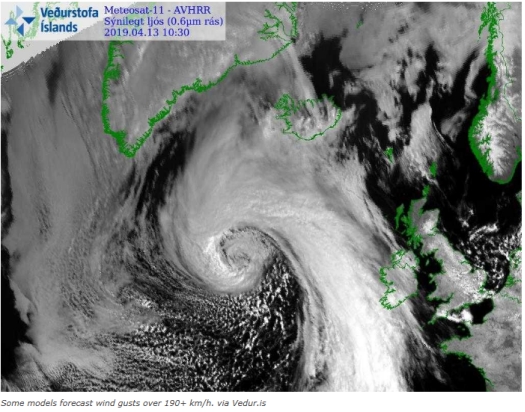 Conclusions from this Blog Post.
First its not a good idea to mix very cold arctic air with hot humid tropical air. That is for sure as deadly as hitting an unexploded bomb with a hammer. The term Bombogenesis is something new to my ear and I am sure it will be repeated as things progress. This type of weather occurrences should make you wake up to the possibilities of what I am blogging about is actually happening. It's time to use that ticket I gave you.
Thanks for reading
Dennis
----------------------------------------

These are my two of my recommended seed suppliers at this URL
Posted by Dennis at 7:36 PM